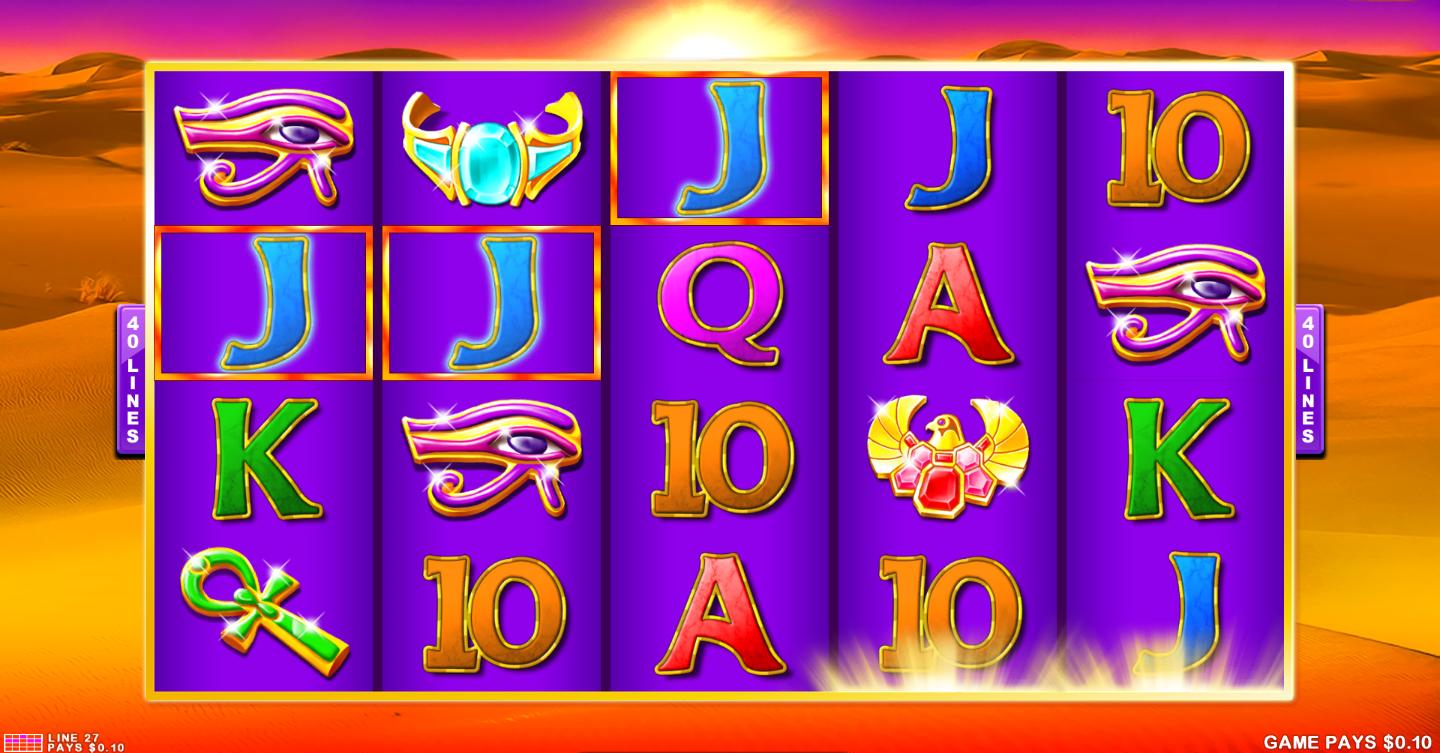 Strap in AE Player Insiders, we’re journeying to the sandy dunes of ancient Egypt with IGT’s Sphinx Wild! Found on the Illinois Players Edge machines, this game is taking everyone by sandstorm!

Sphinx Wild is a standard five-reel slot game with 40 different paylines that can be wagered on. The minimum total bet per game is $0.40 and the max bet is $2.00. Sphinx Wild draws the eye for many reasons, but the main one is the colorful graphics. Imagine an almost techno vibe with a more traditional ancient Egyptian style. The colors are bright magentas and oranges with contrasting golds with blue and green highlights.

The symbols in Sphinx Wild all revolve around traditional symbols found in ancient Egypt. High-paying symbols include a golden sphinx, the jackal head of Anubis, a ruby encrusted bird of prey, the magenta Eye of Horus, a sapphire ring, an emerald ankh, a turquoise ring, and the traditional A, K, Q, J, and 10. Plus, the sunset pyramids will trigger a bonus feature.

When the sunset pyramids symbol appears on all reels, the Sphinx Wild bonus feature is triggered. In the bonus intro, players get to select the number of bonus spins and the corresponding bonus multiplier is awarded. The bonus can be retriggered during bonus spins — up to a maximum of 999 bonus spins! If a retrigger occurs during the bonus spins, the player’s decision is triggered again after the number of bonus spins chosen before have been played. Main game reels and bonus game reels do not have the same symbol composition. The bonus spins are played with the same number of paylines and bet per line as the game that initiated the bonus, and it cost 1 cent to play each bonus spin.

The other exciting feature found in Sphinx Wild is the surrounding wild feature. If it will create a win, the wild symbol of the sphinx will expand vertically and horizontally to the immediate surrounding positions.

Sphinx Wild is one of our favorite games right now thanks to its intriguing mix of ancient and futuristic art style. Have you played this game before? What did you think of it? Let us know in the comments below!