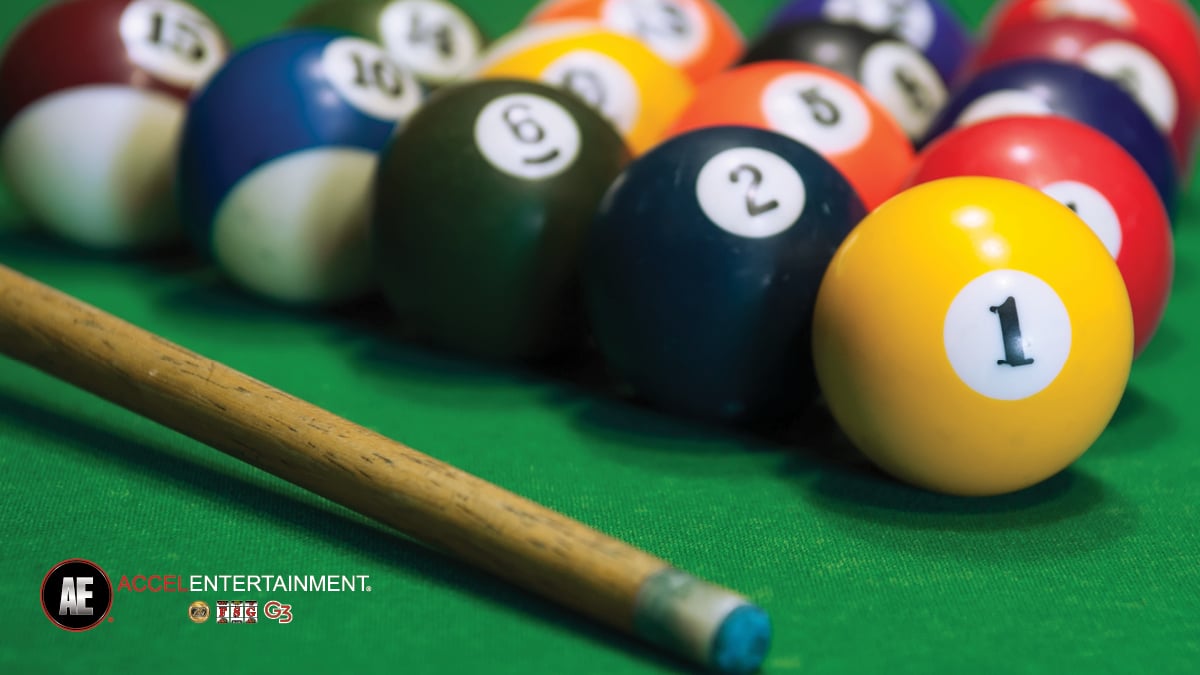 A Beginner's Guide to Playing Pool

At a majority of the bars you go to, you will likely find a pool (a.k.a. billiards) table. You probably know that you use a stick to hit some balls, but you may not know the more advanced rules to playing pool. But with this guide, you’ll know more about pool than the average bar-goer.

First, let’s start with the terms you’ll need to know for playing pool. The stick you use to hit the balls is known as a cue. The balls on the table are called balls, and each one has a number on it. Some of the balls are solid colors, while others are white with a colored stripe. Those colors will be important to the rules later. There is also one solid white ball known as the cue ball.

You’ll also have a triangle rack that you will use to arrange the balls at the beginning of the game. There is also chalk that you can use on the tip of the cue to increase the friction of the cue, so it does not slip when you hit the balls.

The holes in the corners and side of the pool table are known as pockets.

The basic rules of pool are you hit the cue ball into the other colored balls, trying to hit them into the pockets around the table. You’ll know which balls you hit depending on what game you are playing.

If you are able to get one of your balls into a pocket on your turn, then you get to go again. You keep going until you take a shot where no balls go into the pockets. Then it is your opponent’s turn. They then keep shooting until they do not get a ball in a pocket, and it’s your turn again.

However, if you hit the cue ball into a pocket, your turn automatically ends regardless of whether or not you hit any of your balls into the pocket. The other player may then place the cue ball anywhere on the table; however they need to aim at a ball that’s on the opposite end of the table. So, you can’t place the cue ball right next to a different ball next to a pocket for an easy point.

To start the game, you’ll arrange the balls into the rack and place them on the table with the first ball sitting on circle in the middle of the table. Then one player goes to the side opposite the balls and hits the cue ball into the arranged balls.

You are not allowed to touch the balls on the table once the game is started. The only time you may touch a ball is if the cue ball is accidentally hit into a pocket and you need to retrieve it.

The most popular type of pool game is 8-ball. In 8-ball, the first person who hits the balls will determine which balls are your assigned balls. If they hit a solid ball into a pocket, then they will have to hit solid balls the rest of the game and the second person will have to hit stripes. And then it will be vice versa if the first person hits a stripe ball into a pocket first. If the first person does not hit a ball in, then the second person goes and can hit any ball in. Whichever type of ball they hit in they will be able to play the rest of the game. If the first person hits both a stripe and a solid into the pockets at the beginning, they can choose whichever type of ball they want.

The solid black eight ball however does not count as either a stripe or solid.

Nine ball pool is slightly different than eight ball. Instead of being assigned stripes or colors, both players are trying to hit all the balls into pockets in numerical order, starting with one and going to nine. The first player tries to hit the One ball into a pocket, and if they succeed, they then move on to the second ball. But if they fail, the second player then tries to go for the One ball. The game continues until all balls are in the pockets, and whoever hits the most balls in wins.

Cutthroat pool is meant if you have an odd number of players. You simply divide all 15 balls between however many players you have. If you have three people, each person is assigned five balls. And if you have five, each person is assigned 3. Each player then tries to hit their balls in before the other players. You can stop when the first person gets all their balls in, or you could wait until only one player is left with balls on the table.

Are you an expert pool player? Let us know in the comments below, and tell us your favorite place to play!