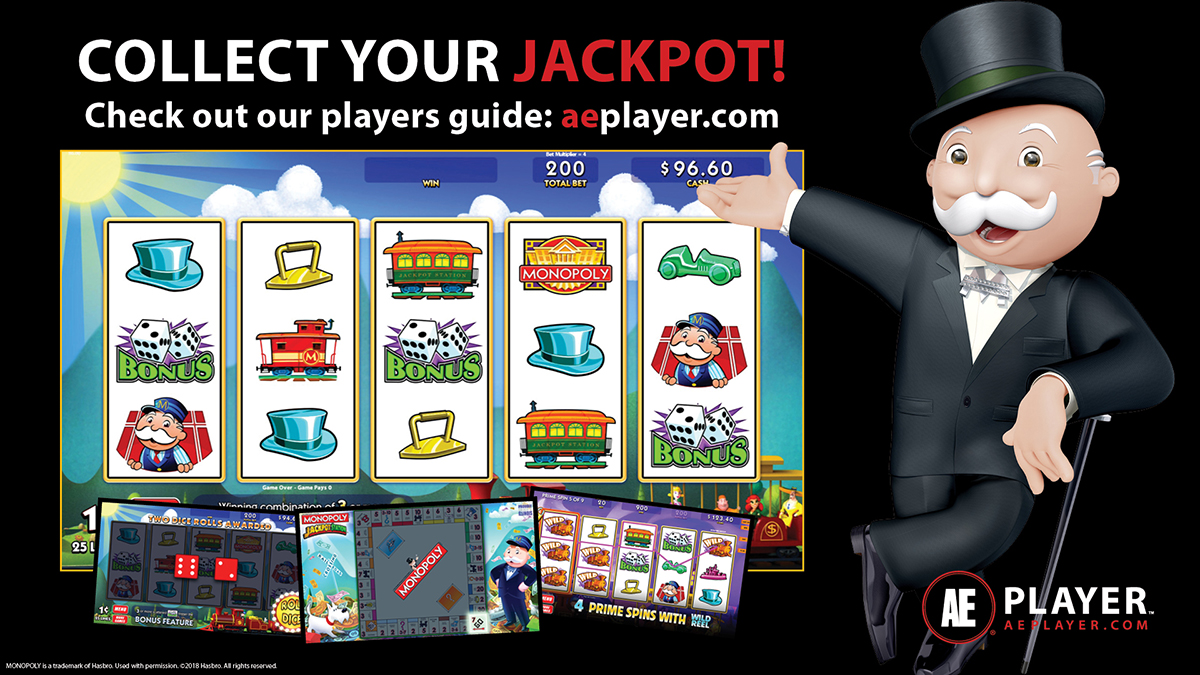 AE Player is no stranger to new and exciting slot games, but few games can match the excitement felt by fans for our current featured game – Monopoly Jackpot Station. The WMS game has quickly become popular among our players, with innovative gameplay unlike anything else found in the video gaming industry.

Monopoly Jackpot Station is a 5x3 reel slot, meaning that there are five different reels each measuring three tiles high. There are 25 possible paylines for the base game. Only the highest winner is paid per winning combination. Frequent players of the board game will recognize some of the symbols present in the slot game, including the Monopoly logo, Mr. Monopoly, Monopoly dog, freighter token, car token, top hat token, and iron token. Train car symbols are also present in the game, along with a golden train symbol that represents a wild space. There are also symbols that indicate the Community Chest feature and a Bonus Roll for the dice feature.

The Community Chest feature begins when a player receives three or more adjacent chest symbols on a payline. Players may select one of five chests to change into any symbol from the base game (except for the golden Monopoly logo).

Players of Monopoly Jackpot Station can trigger the start of the Jackpot Station Prime Spins Bonus when they land three or more scattered bonus dice symbols. Depending on how many bonus symbols were spun, your total bet could be multiplied up to 20x the original bet! Players will advance their indicator through a simulated Monopoly game board.

Two or more scattered bonus dice symbols will award additional prime spins for the player to use. The player will then roll the dice to advance their indicator to a new spot from their previous position. All additional spins will use the enhancement that was chosen for the triggering spin. During the Jackpot Station Prime Spins Bonus, players will be using an alternate set of reels. Though different reels, winning combinations on these reels are identical to the base game (except for the scattered bonus dice symbols that award the extra prime spins).

Monopoly Jackpot Station by WMS is a consistent player favorite for those in the Illinois video gaming industry. Much of the enthusiasm for the game comes from the recognizable characters and icons that are found in the slot game and traditional board game. Innovative bonus features like the Jackpot Station Prime Spins Bonus also allow players an escape from more traditional slot games and add new excitement to the game for frequent slot players.

Have you played Monopoly Jackpot Station? Let us know your thoughts in the comments below and what game you want to see featured next.